11:00 pm That’s it, folks, I’m out. Senate results are still up in the air, of course, as are a few seats – including Indi and Kennedy.

Right now Arthur Sinodinos is informing Labor and the Senate that they have no choice but to roll over and repeal carbon pricing because there is not a ‘mandate’. Given that his own Coalition flatly refused to do that on the Emissions Trading Scheme, I find the hypocrisy truly staggering.

See you next time, folks. Thanks for sticking with me.

10:12 pm Tony Abbott claims victory, making a point of letting the party faithful know that Labor’s vote is at its lowest level in 100 years. He says that he knows voters will punish those who take them for granted. One wonders if those words will come back to haunt him.

As he says his government will be judged by its deeds not its words, Abbott walks back from any hint that the Budget will be in surplus before the end of the next Parliament. There are huge cheers in the room as he goes over his campaign talking points – repeal ‘carbon tax’, stop the boats, build roads. The mining tax doesn’t get a look in.

9:50 pm Kevin Rudd concedes defeat, saying he wishes Tony Abbott well. He thanks each losing ALP member for their service, along with members of his former ministerial and campaign team. It’s an exceptionally gracious speech.

Oddly, this doesn’t sound like a concession speech. Nor did it sound like an announcement that Rudd will step down as Opposition Leader – right up until now. He just confirmed he will not contest for the leadership. Cue the frenzied speculation.

And cue the backlash. For goodness’ sake, former Prime Minister Julia Gillard – arguably, the person with best cause to be viciously angry at Rudd – was able to be gracious and congratulate Rudd and his team. Pity the voters who are so vocal in her defence can’t take a leaf out of her book.

9:24 pm The knives are out. Jason Clare says Rudd should resign as Opposition Leader, Combet blames him for pretty much everything (possibly including the extinction of the dinosaurs), and even Kate Ellis is talking about ‘putting the disunity behind us’. Tanya Plibersek gave her own party ‘0/10 for governing ourselves’.

On another note … think about this, folks. Barnaby and Palmer in the House. Together. At Question Time.

It’s the gift that keeps on giving.

8:20 pmLooks like the Coalition will also control the Senate.

7:45 pmMal Brough has won the seat of Fisher. Well done, that electorate – your new Federal representative is an admitted liar and a perjurer.

7:10 pm Only about 5% of the vote counted on the east coast. At this stage, Rudd looks to hold Griffith, Mike Kelly the bellwether seat of Eden-Monaro, Bob Katter Kennedy, and Wilkie Denison. Palmer looks as though he may take Fairfax.

The ABC’s Antony Green has called the election for the Coalition.

7:00 pm Seems there’s something not quite right with the ABC’s vote calculator this year. So far, Antony Green has rejected the numbers on over five seats, saying they cannot possibly be correct.

6:40 pm There’s 0.6% of the vote counted in some seats, and already the commentary is handing them over. Makes you wonder why you vote, really.

Amusingly, when the initial tiny swing was towards Labor, it was summarily dismissed.

And no one can cope with the fact that the Palmer United Party is polling significantly – ahead of the Greens in Hunter, for example.

6:00 pm Polling places on the east coast have just closed (with the exception of those in Caulfield North – getting an early train home, are you? Must be nice to be so cavalier about being available for people to vote as you are supposed to be until 6:00 pm. Let the counting – and the drinking – begin.

5:10 pm Getting reports from voters in Elsternwick that two polling places are already closed – 50 minutes early. The places in question were in Caulfield North. Door locked, banners pulled down, lights off.

4:40 pm The language from the media is getting more and more ridiculous. ‘Pools of Labor blood on the floor’ is among the milder epithets. Michael Kroger, self-described Liberal Party powerbroker, has called the election. Guess who he says has won?

And there’s still just under 90 minutes to go. Imagine the frenzy when the counting actually starts.

It’s not too late to pop out to the bottleshop …

3:10 pm It occurs to me that too many in both politics and the media view achieving government as a reward. It’s not. It’s a responsibility. You’re there to serve the people, not gratify your ego.

And on a similar note, some informal vox pops down at the local voting booth, supermarket and liquor store (yes, I’ve laid in supplies) reveal a disturbing ‘what’s in it for me’ trend among voters, too. Their primary complaint against either major party is that there’s nothing in the election promises for them, in terms of money.

When did we become such a selfish lot of bastards? Why is it such a hard thing to see that a benefit to someone in dire need (such as Disability Care) actually helps us all?

Finally – if you’re looking at the major parties and thinking, ‘Well, Kevin’s had a turn, now it’s Tony’s’? You need to take a step back and realise you’re not policing the slide in the playground.

1.00 pm I have to say, I admire the restraint of all those Labor candidates who are being fronted by media and told they’ve lost the election. Some of the reporters are so smugly patronising when they ask the candidates how they feel. It honestly would not surprise me if someone hauled off and said they felt like jamming an exit poll into an unmentionable part of some journalistic anatomy.

Meanwhile, some media actually seem surprised that people are reporting having voted for the Palmer United Party. What’s the matter, kids – doesn’t your worldview take in the idea that people don’t want to settle for a nice, neat, two-party system?

12.00 midday Heard a lot of whingeing from people complaining that they have to vote. Begin rant:

On average, you spend ten minutes a year voting – including council, state and federal elections. Ten. Minutes. You spend longer standing in line waiting for your coffee in the mornings.

And what do you get for giving up that time? The chance to actually participate in how your nation is governed. And don’t give me that nonsense about, ‘oh, but it doesn’t make any difference’. It does. Every vote counted makes a difference. That’s what turns a safe seat into a marginal one. That’s what causes upsets like Prime Minister Howard losing his seat in 2007.

And – if you are someone who looks at the major parties and thinks, ‘a plague on both your houses’ – every first preference vote cast for a minor party is money in their campaign warchest for the next election. That’s how a party like the Democrats, and later the Greens, went from being a curiosity to a force in politics.

You get a vote. You get a say. You have opportunities that people in other countries can – and do – die for.

Also, you get a sausage. So stop whining, already.

11.30 am Having done my democratic duty, I can report that the sausages at Kingsbury Primary School at top-notch. As for the egg-and-bacon wraps … well, I’d post a picture but they were too delicious for me to stop eating long enough to get out my phone.

10:10 am Good morning, all. The polls have been open on the east coast for two hours, and just opening now in Western Australia. (Hellooooo, over there!) I see that the ABC – with its panel of infallible psychics – has already called the election for the Coalition, so I guess we can all just stay home.

Vote early, but vote late, but get out there and vote. Yr obdt. correspondent will be venturing out to investigate the state of the sausage sizzle at the local polling booth soon. 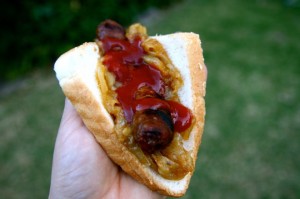 The perks of voting.

This entry was posted on Saturday, September 7th, 2013 at 10:14 am and is filed under Live Blog, Politics. You can follow any responses to this entry through the RSS 2.0 feed. You can leave a response, or trackback from your own site.